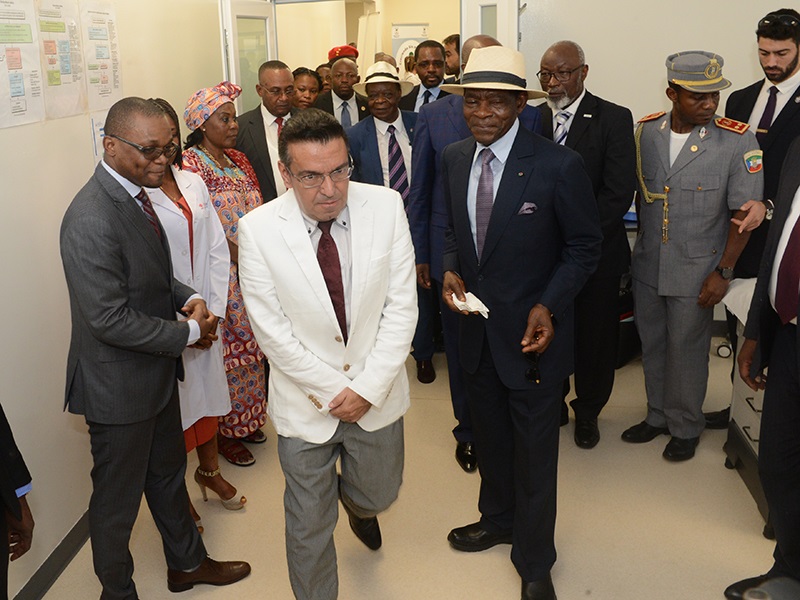 On February 20, MCDI participated in the inaugural ceremony of the Baney Research Center, a hospital and research laboratory complex in the Baney District of Bioko Island, Equatorial Guinea. The president of Equatorial Guinea, Teodoro Obiang Nguema Mbasogo, as well as his wife Constancia Mangue de Obiang, presided over the inauguration. The research center has been financed by the Ministry of Mines and Hydrocarbons of Equatorial Guinea in collaboration with a consortium of oil and gas companies led by Marathon Oil. MCDI, as managers of the Bioko Island Malaria Elimination Project, manages the implementation of malaria vaccine trials of Sanaria Inc.'s PfSPZ vaccine that will now be based at this research center.

The Baney Research Center's opening coincides with the fifteenth anniversary of the launch of the Bioko Island Malaria Control Project (BIMCP), and six years since the launch of the Equatoguinean Malaria Vaccine Initiative (EGMVI). The research center will serve as the home site of the third phase of the clinical trials of Sanaria Inc.'s malaria vaccine candidate. To date, over 200 Equatoguinean subjects have participated in the first two phases of the trial. This year the two projects, led by MCDI as an implementing partner, are combining to form the Bioko Island Malaria Elimination Project (BIMEP), with the goal to combine proven vector control activities and the malaria vaccine candidate in order to stop transmission of malaria on the island. The BIMEP is also funded by the Government of Equatorial Guinea and the consortium of oil and gas companies led by Marathon Oil.

In addition to the malaria vaccine trials, the Baney facility will host one of the eight consulting rooms of the Equatorial Guinea Cervical Cancer Screening and Treatment project; this new room will join the network or centers in which patients are able to go for education, screening for cervical cancer and treatment of pre-cancerous lesions in one visit. MCDI, which leads this project funded by Noble Energy, has trained more than 40 national doctors, midwives and nurses who work in this network and perform mobile campaigns reaching rural areas of the country. MCDI's Country Director Carlos Cortes Falla was able to showcase the project to President Obiang during his tour of the hospital.

With the opening of this center, Equatorial Guinea will be able to grow its medical research capabilities. In his speech at the inauguration ceremony President Obiang mentions that the EGMVI began with a handful of Equatoguinean national health workers on the project, but now the project employs over 50 Equatoguineans. The center will bring opportunity for developments not just in eliminating malaria, but also in combatting other diseases that affect the country by providing access to state-of-the-art facilities for research, including highly sophisticated laboratory equipment purchased by MCDI. The hospital at the center will provide essential clinical care to Baney District, and will serve over 16,000 residents of the region.

MCDI is committed to developing the capacity of the health system in Equatorial Guinea. As the first clinical trial in the history of Equatorial Guinea, the malaria vaccine trials are expanding the country's capacity to become a future leader in medical research. The BIMEP sponsors promising Equatoguinean researchers to attend graduate school abroad to bring back their training to their home country, as well as provide on-the-job training for health workers in improving their diagnostic and treatment capacities in malaria.