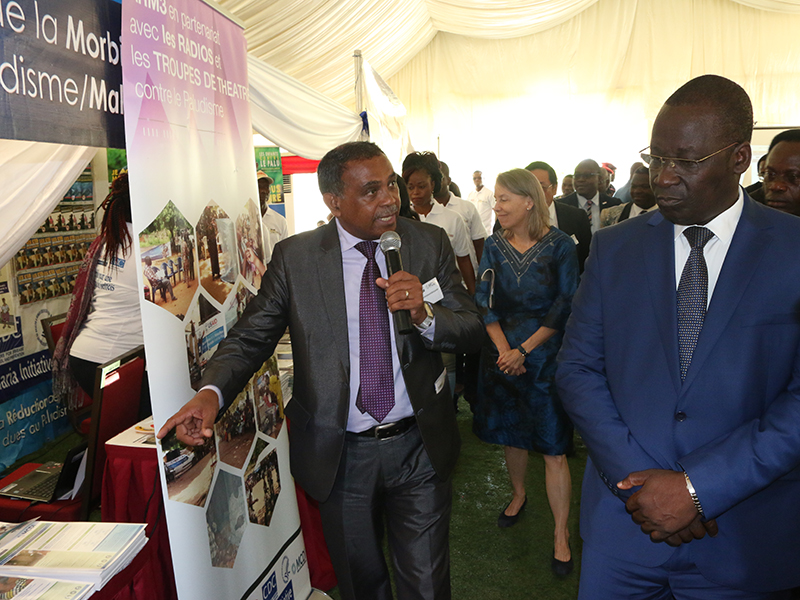 On May 31, 2018 MCDI celebrated seven years of success of the USAID Accelerating the Reduction of Malaria Morbidity and Mortality (ARM3) program in Benin via a joint open house with the Advancing Newborn, Child and Reproductive Health (ANCRE) program led by URC. From 2011 to 2017, ARM3 has seen the total percentage of suspected malaria cases properly diagnosed either through rapid testing or laboratory diagnosis increase from 64.2% in 2011 to 93.7% in 2017, and the number of pregnant women who received at least two doses of vital preventative medicine triple from 23% to 67%. This celebration highlighted how Benin's National Malaria Control Program (NMCP), in collaboration with ARM3, has created a dramatic change in malaria's effect on Beninese society.

During the meeting, the Chiefs of Party for both ARM3 and ANCRE presented their program achievements, challenges and future outlook for improving health in Benin. ARM3's Chief of Party, Dr. Gilbert Andrianandrasana presented some of ARM3's strongest achievements, including the distribution of over 12.3 million bed nets over the course of the project. Since 2011, ARM3 has also seen

Benin’s Minister of Health, Dr. Alassane Seidou, as well as Ms. Lucy Tamlyn, the American Ambassador to Benin, were the guests of honor and gave closing remarks on the impact of ARM3 and ANCRE for the Beninese people. All of the directorates of the Ministry of Health were also represented, including all the district directorate and health zone leaders, as well as other international organizations, USAID representatives, community leaders and community health workers.

Brand new ARM3 brochures and fact sheets were available at the event in both English and French. These materials outline the numerous interventions and achievements of the program, including Behavior Change Communication (BCC), working with the private sector to improve health service delivery, improving uptake of intermittent preventative treatment in pregnancy (IPTp), improving malaria diagnosis, developing innovations in supply chain management for malaria commodities, and integrating community case management. These documents are now available on MCDI's Resources page.

MCDI also debuted a short documentary film about ARM3, "Reducing Malaria Morbidity and Mortality in Benin – the ARM3 Story", which illustrates ARM3's wide-ranging impact across the country. The film demonstrates the strengthened capacity of the NMCP since the inception of the project, visits antenatal care clinics where women are given IPTp, and meets its direct beneficiaries from around Benin.

Over the past seven years, much progress has been made in Benin to reduce the burdensome impact of malaria on society. ARM3 has worked with the NMCP to improve diagnosis, treatment, and supply chain management; however, the fight is far from over. Malaria is still the leading cause of mortality in children under five, and households in Benin spend approximately 25% of their annual income on preventing and treating malaria, posing a significant strain on the country's economic development. Thankfully, the interventions and tools developed through ARM3 have significantly built the capacity of the national government to effectively continue this work into the future, and future PMI funding will continue to develop new strategies and innovations in combatting malaria.